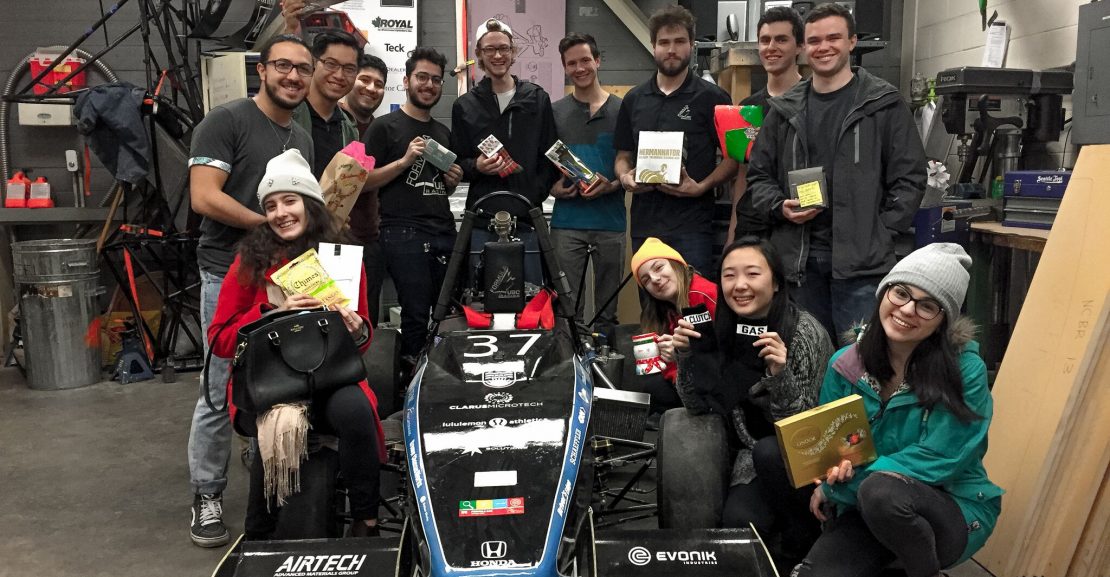 January 26, 2018
Posted by: Company of Cars Team
No Comments

Over the last few months, the Formula UBC SAE team has made some great progress designing and manufacturing their new Formula car. With the design phase coming to a close, the team’s focus will shift towards manufacturing this year. The team will be working hard to try and get the new car out on the track for some testing as soon as possible.

The start of the new year comes with deadlines for competition submissions. First up is the Structural Equivalency Spreadsheet and Business Logic Case submissions: the Chassis and Materials teams are crash testing a new impact attenuator for energy absorption and the Administration team is working on finalizing marketing and financial plans. Below are the summaries of each subteam. It details what they have achieved and what they plan to do in the coming months.

Engine team has made significant progress on the projects for this year and is transitioning from design to manufacturing phase. The team is working to prepare the new fuel tank and exhaust for welding, selecting materials and manufacturing processes for the intake with the help of the materials team, and selecting potential oil coolers and pumps. For the oil system, members are designing a test jig for the oil sump to characterize the ability of their system to deaerate oil and avoid sloshing. The team is also continuing to build the engine dynamometer system and is anticipating initial tests to be run on it in early 2018. Moving forward into the new season, the engine package will be lighter, more reliable, and driven by an improved tune using their chassis and engine dynamometers.

Upper year members tackled redesigning the sprocket and sprocket adapter for the 2018 vehicle, and junior members are tackling the Chainguard assembly and making impressive progress on developing their part and assembly modelling skills. Team members have the chance to collaborate with multiple sources on their design tasks. Later will see members manufacturing their designs with guidance from senior team members, gaining experience with design verification, design for manufacturing, and using machine shop equipment. New loading models were developed for the differential supports and bearing housings (pillow blocks), led by a new Mech 2 team member. Numerous iterations and design review with other team leads have produced a stronger, more-integrated design from previous years. Final FEA will be performed before manufacturing the first set of parts.

Control team has begun designs for this year’s brake system and pedal box. The team is looking forward to testing the current car for brake data, as well as driver line of sight and overall cockpit comfort. The new members will be taking on the challenge of designing the steering wheel, dashboard, headrest, and paddle shifters. They will be learning about and using Finite Element Analysis, topology optimization, and the mechanical design process.

The Chassis team has been busy throughout the first term of the 2017-2018 season. The chassis design was finalized in mid-September so that the tube package and jigging pieces could be ordered from VR3 Engineering and Viking Profiles, respectively. With the sponsors’ quick turnaround time, tubes and welding jigging are done in October. The team rapidly progressed into the manufacturing phase and, after some last minute adjustments to accommodate a change in the front suspension design, the chassis was placed in the jig and delivered to Kremyr Racing to be welded. Meanwhile, the designs for the steering column and its supports have been finalized and manufacturing is scheduled to take place in the New Year. The Chassis team has also been working with the Materials team to perform physical tests on a new aluminum honeycomb impact attenuator design. After an unsuccessful test this term, the design of the impact attenuator’s support structure has been revamped and the team is confident that the second round of testing in January will be successful.

The past few months have been very busy for the Aerodynamics team. The new 2018 bodywork design has been finalized and the moulds are almost complete. This year, they are using MDF (medium-density fibreboard) for the body moulds, which meant members got a chance to do some hands-on work with lots of wood cutting and laminating. The UBC Centre for Advanced Wood Processing has helped them finish their moulds on the new KUKA robot arm, ensuring the final geometry matched the CAD perfectly. The pieces look fantastic and they will start laying some carbon in the new year. In addition to bodywork, the team has also spent the past few months running lots of CFD (computational fluid dynamics) simulations to inform aerodynamic design decisions, including looking at wing performance in yaw, front wingtip vortex breakdown, and cooling duct effectiveness. The design refinements are almost complete and the beginning of January will be focused on wrapping up any last details.

Here are two videos showing how their wood moulds being manufactured.