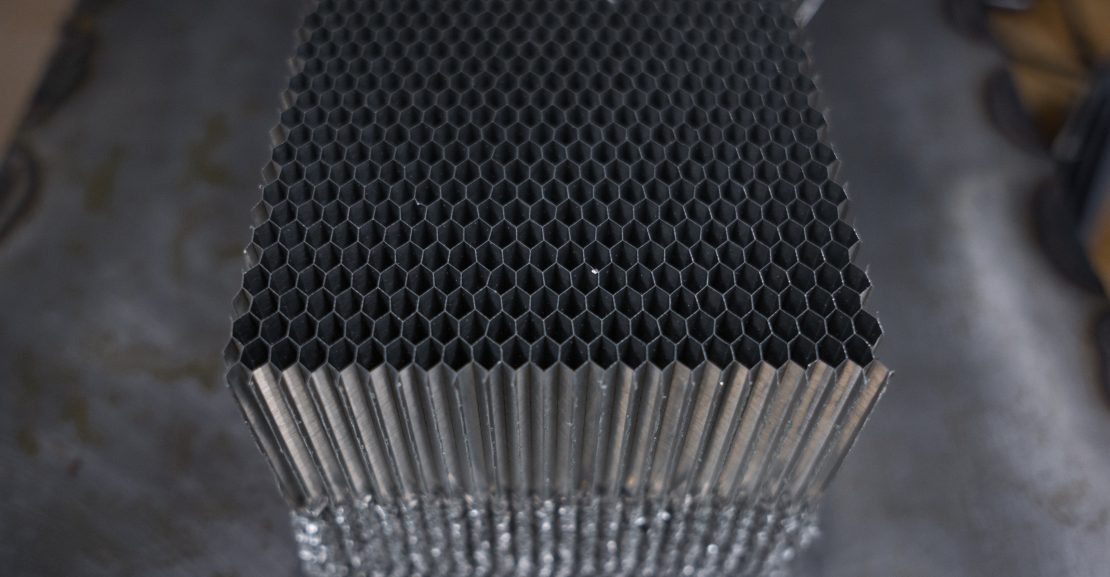 March 9, 2018
Posted by: Company of Cars Team
No Comments

The Formula SAE Racing competition requires an impact attenuator to be attached to the front of the racing vehicle to slow the vehicle in the event of a frontal crash. Custom designs must be physically tested to show that the attenuator absorbs at least 7350 Joules of energy and that a 300 kg vehicle impacting a solid, non-yielding impact barrier with a velocity of impact of 7.0 meters/second decelerates the vehicle at less than 20 g’s average and 40g’s peak. 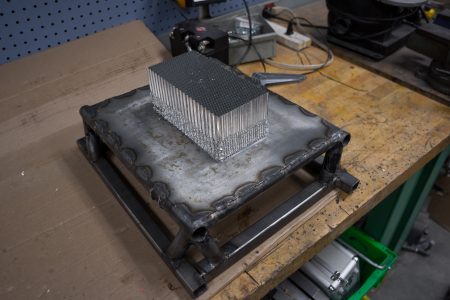 According to the Chassis Lead at UBC Formula SAE, Scott Fjorbotten, the impact attenuator project has three main components: choosing an attenuator, securely mounting the attenuator on the chassis, and providing adequate load paths to react loads into the chassis without excessive deflections. The Formula SAE rules have extensive requirements for the impact attenuator assembly including minimum attenuator size, minimum energy absorption, maximum and average crush force, maximum permanent chassis deflection after impact, and minimum attachment strength. Some of these requirements can be satisfied using hand calculations, however, the rules require that either an impact or quasi-static crush test is run on a structurally representative impact attenuator sample.

The attenuator that UBC Formula SAE team chose is an aluminum honeycomb block. Aluminum honeycomb is essentially a hexagon pattern of a thin foil and can demonstrate tremendous strength and energy absorption characteristics. A wide variety of foil thicknesses, hexagon sizes, and aluminum alloys are readily available, and with the help of design handbooks available from honeycomb manufacturers, a suitable configuration was chosen. Honeycomb absorbs energy by buckling at its base and folding in on itself, thus a relatively small amount of energy is stored in the material as the load is applied, the structure does not “spring back” like most common materials do, and the load required to crush the honeycomb is relatively constant. However, initiating the crushing process typically requires a much higher load than the crush load after initiation. This is mitigated by “pre-crushing” the honeycomb. In this process, the honeycomb is intentionally crushed a small amount before it is installed on the vehicle. When the attenuator is subsequently loaded, the force required to re-initiate the crushing process is much lower than for an attenuator that is not pre-crushed (this can be seen as a peek at the beginning of the load-deflection curve in Figure 1). This means that in the case of a frontal collision, the maximum deceleration felt by the driver is reduced. 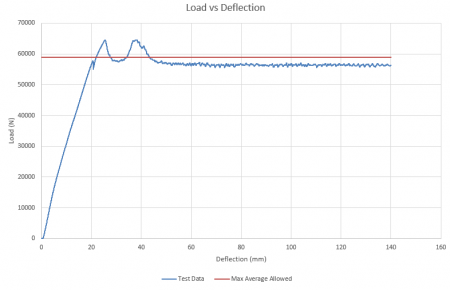 Figure 1: Crush test load-deflection curve. The initial ramp in load occurs before crushing is initiated. The two peaks are characteristic of crush initiation. The relatively flat portion of the graph shows the constant crush load characteristic of honeycomb.

Formula SAE rules require the method used to attach the attenuator to the chassis to be equivalent to four 5/16” SAE Grade 5 bolts. The UBC Formula SAE team chose to use a structural adhesive to mount the honeycomb block onto the steel anti-intrusion plate welded to the front of the chassis. The strength of the bond was determined to be sufficient using both strength values provided by the manufacturer of the adhesive and through shear testing of steel to aluminum bonds on small standardized samples (about 1” wide with a 1/8”  long boded area).

A quasi-static crush test was run to demonstrate their impact attenuator design meets the requirements of the rules. This test method was chosen over dynamic crash testing due to the availability of test equipment at UBC. A quasi-static crush test is done using an Instron machine which crushes the assembly at a constant rate while recording the load required as the attenuator deflects. Initially, when the load has applied the tubes of the chassis section and the steel plate deflect and the attenuator is not noticeably deformed. This effect can be seen as the ramp at the beginning of the force deflection plot. Once enough load is applied, attenuator crushing is initiated; this occurs at the peaks of the force deflection curve. Once the attenuator begins to crush, the crush load required remains relatively constant until either the test is stopped or the entire attenuator is crushed. In Figure 1, the test was stopped before the attenuator is fully crushed. Once the test is complete, energy absorption is calculated by integrating the force deflection curve (i.e. calculating the area between the load-deflection curve and the deflection axis in Figure 1). The result is shown in Figure 2.

Once testing is complete and the data is analyzed, a report containing pictures before and after testing, design calculations, material certifications, and test results are submitted to SAE to show the requirements of the rules have been satisfied.

The attenuator tested actually weighed only 425g (1lb) and it took a load of about 55 kN (12000 lbs) to crush it as shown in the video. Check out the video of the crash test here: